Jeffrey Gibson is a multidisciplinary artist whose work continues to grow and shift by exploring new forms of media along with the concept of what is considered artwork. Jeffrey is a member of the Mississippi Band of Choctaw Indians and is of Cherokee descent, as well as a member of the LGBTQ+ community. Drawing from his heritage, he uses traditional Native American beadwork and textiles to explore colonialism and post-colonial mindsets as well as themes like love, community, strength, vulnerability, and survival.

Beyond the physical artwork he creates, Jeffrey’s artistic and creative practice is impressive to experience. Jeffrey grew up traveling the world because his father worked for the United States Department of Defense. As a result, he lived in Colorado, North Carolina, New Jersey, Germany, and South Korea. Constantly moving gave him the opportunity to explore and experience other cultures, helping to shape him as an artist and gave rise to many themes explored in his artwork today. He completed his undergraduate studies at the School of the Art Institute of Chicago before he relocated to England and received his masters at the Royal College of Art, an opportunity sponsored by the Mississippi Band of Choctaw Indians. 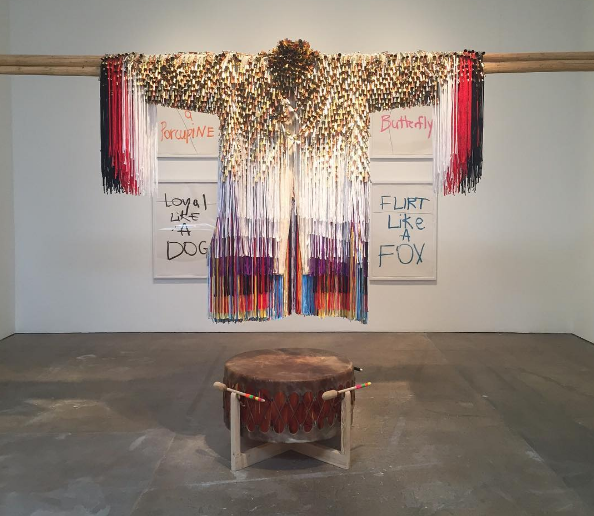 Installation of Jeffrey Gibson LIKE A HAMMER, 2016 at SITE Santa Fe. Tia Collection.

Jeffrey was disappointed by the lack of inclusion and representation of Native artists in the art world and this became the driving force for him to push Native American ethnic history onto the art scene through his work. In his TED Fellows Talk in 2012, he explains his mindset behind starting a new series in his career, “I began to wonder, where would Contemporary Native American art be today had Modern Native American art continue to develop as part of, or in parallel with mainstream Modern Art?”

This new body of work focused on collaboration with other Native American artists. Each commissioned artist drew from their cultural knowledge and told stories about their experiences across Northern America. It transformed Jeffrey’s perspective and his work moving forward. “I went from an artist working alone and resenting it, to an artist working with communities and loving it,” he explained. “I found being a solitary artist limiting and found tremendous abundance and power working with communities that have always been at my fingertips.” His work continues to share hope by inspiring others to tap into their communities, allowing them to build something greater than the artist themself. 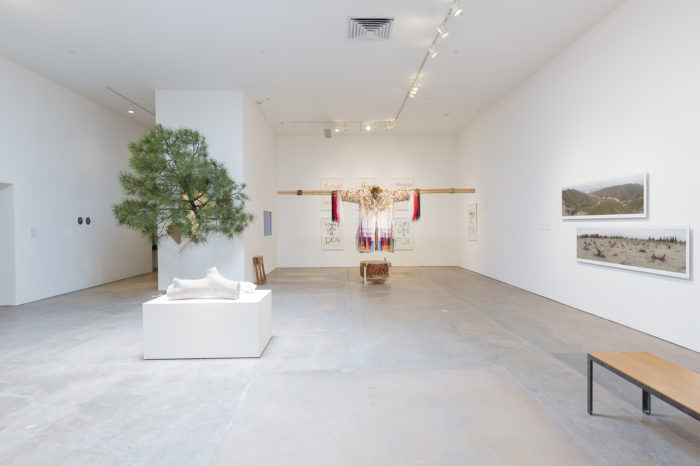 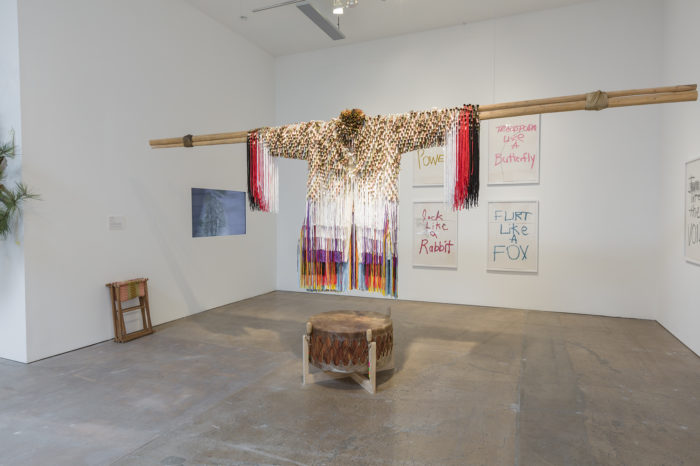 His love for craft, historic material, and culture grounds his practice. The idea behind his work is deeper than the object he creates, making the viewer consider the artist, their inspiration and their process. Jeffrey Gibson channels these concepts through his work. His hanging pieces, including Like A Hammer, are not just captivating, they also pay homage to his ancestors, the inspiration gained from pow wows and how ritual of dress generates strength. Gibson himself describes his work not as something that automatically gives protection or power, but something that allows and gives you permission to believe in protection and that itself is empowering. His hanging robes can weigh as much as 120 lbs, giving the wearer of the robe a sense of resistance from the physical weight. To Jeffrey, this means that the piece is giving one strength to persevere because, without resistance, one can not move forward. 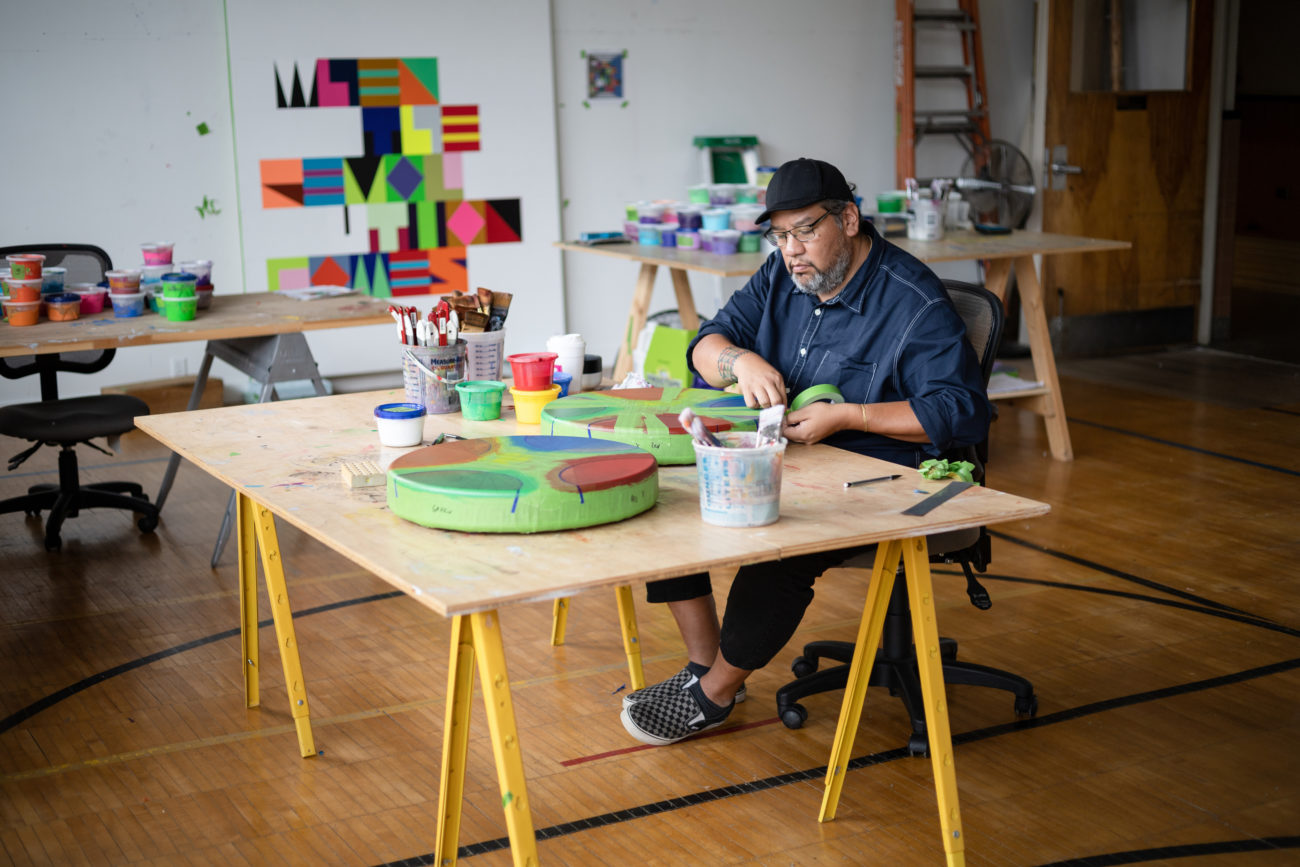 Inspired by pop and queer culture, as well as his Native American heritage, Jeffrey speaks to and reaches a larger audience. Combining beadwork, fringe, and jingles associated with Native American pow wow rituals with lyrics from hit songs from the 1980s and 1990s, Gibson comments on the intersections between community and individuality, gender and identity, and notions of performance and ritual. The blending of materials and references creates an eclectic and celebratory mash-up, showing the complexity of individuals, and validating those who are often excluded from mainstream culture. 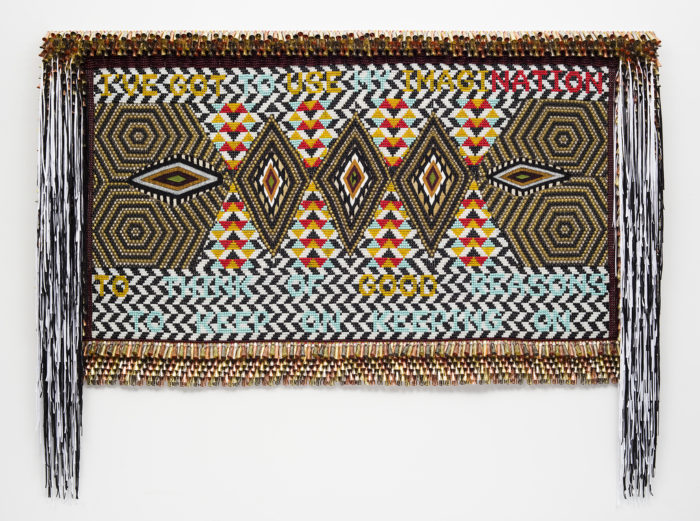 Jeffrey Gibson’s work, TO MY NATION (pictured above and below), references the song I’ve Got to Use My Imagination by Gladys Knight, a soul icon and LGBTQ+ ally. Gibson describes the song as an anthem in the queer community in the 1980s and 1990s. He explains that LGBTQ+ nightclubs had to be charged with positivity and celebration because people went home to a world that did not celebrate them after the clubs closed in the early morning hours. These songs and places gave inspiration and support which fueled hope for change in the future. Gibson’s works invite us to share his vision of the world that the differences that define us can also unite us. 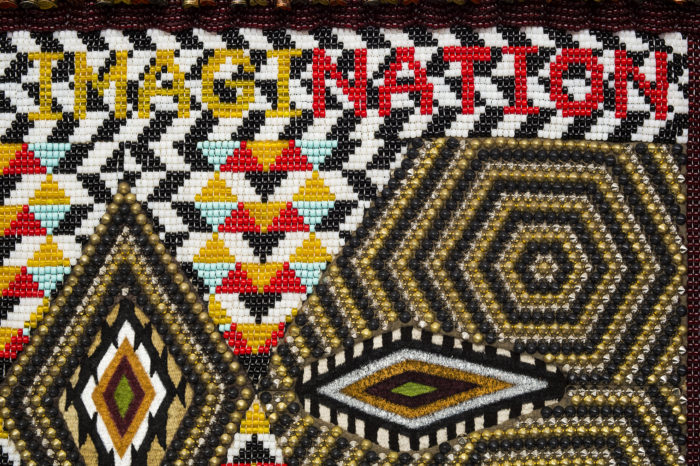 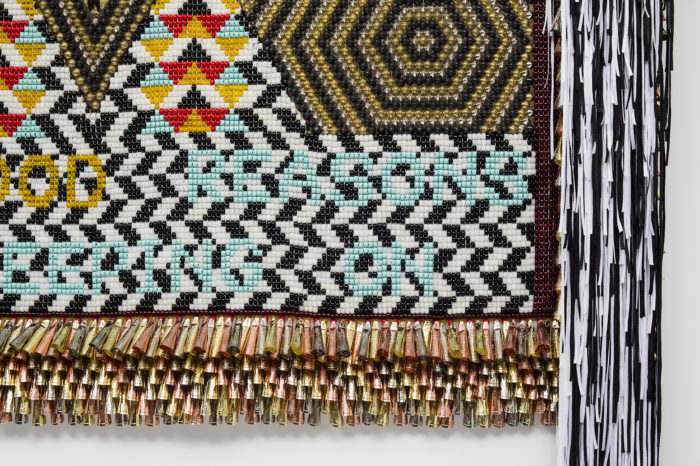 Gibson was the recipient of the 2012 Joan Mitchell Foundation Painters and Sculptors Grant and the Creative Capital Foundation Grant. He also received the TED Foundation Fellowship, along with grants from the Smithsonian and Jerome Hill Foundation in 2012. In 2019, he became a MacArthur Fellow. Jeffrey’s work can be found in museums internationally, and most recently, Tia Collection is working with the Art in Embassies Program in Washington, DC to loan TO MY NATION to the residence of Ambassador Michele Taylor, the US Representative on the UN Human Rights Council in Geneva.