As an artist, activist and teacher, Edgar Heap of Birds (Cheyenne, Arapaho) has devoted his four-decade career to asserting acknowledgement and respect for Indigenous people. Based in Oklahoma City and on tribal land, where the artist has lived since 1981, Edgar Heap of Birds employs familiar forms of street signage, advertising, and protest posters to make works that confront oppressed histories of state and settler violence against Native communities. By transforming vernacular language into monumental works of art, Heap of Birds blurs the boundaries between aesthetics, pedagogy, and activism, creating a body of work that opens new critical perspectives on American histories and cultures. 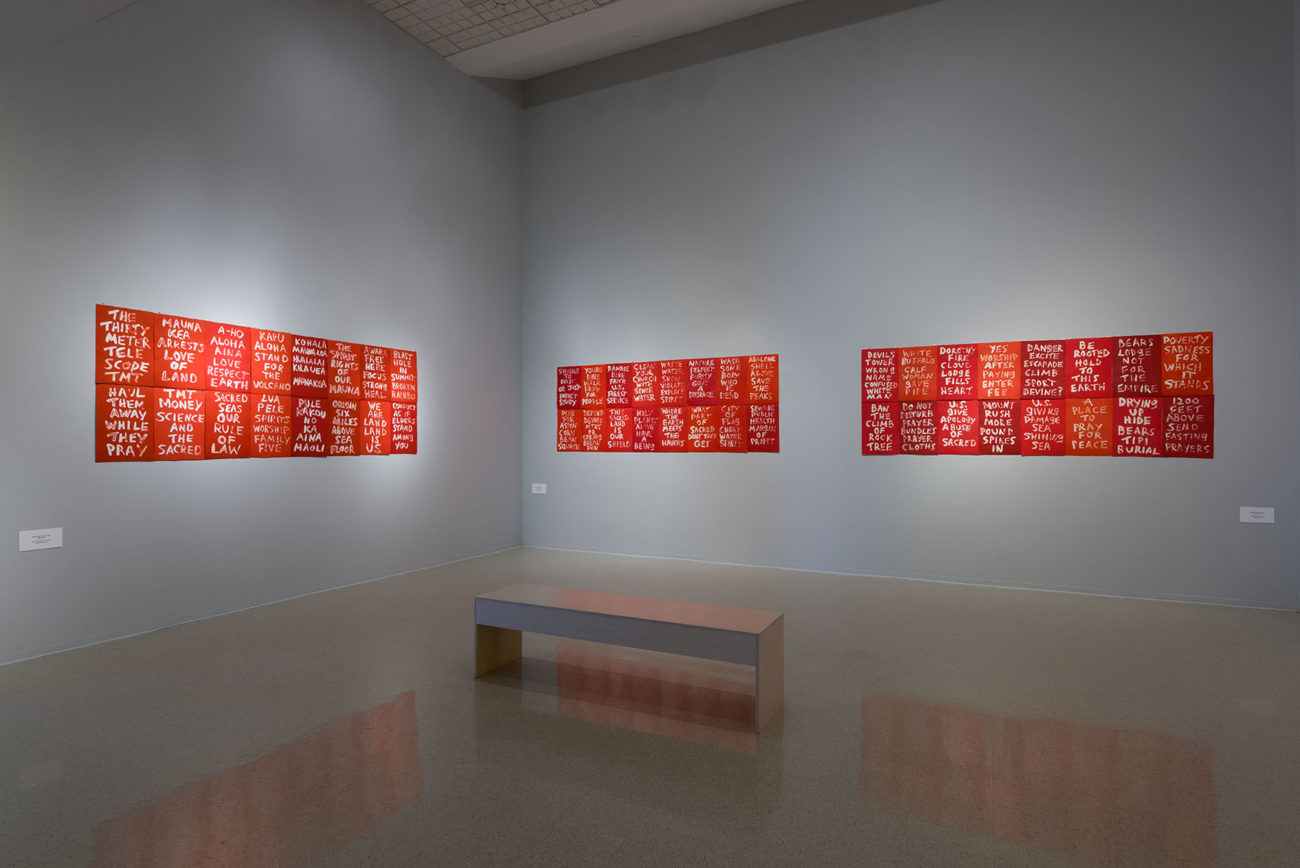 In Defend Sacred Mountains, a suite of Edgar Heap of Birds’ text prints calls attention and rallies resistance to the desecration of four mountains that are sacred to Native Americans: Bear’s House/Devils Tower, Wyoming; San Francisco Peaks, near Flagstaff, Arizona; Bear Butte, South Dakota; and Mauna Kea, Hawaii. Heap of Birds documents the history of the sites and the struggle over land rights connected with these four mountains in 64 monoprints that reveal how lands venerated by Native Americans are being plundered. It is this cultural contempt against which Edgar Heap of Birds is crusading.

“I see it, not as part of my artistic activist legacy, but of my life. I am raising awareness of these sites in order to protect them. They should be kept pure, untainted, and free from profiteering. I believe I’ve a responsibility to keep them viable for future generations. It’s a reality. Every day when she prays, my wife uses the medicinal plants from some of these locations. Others use these sites for fasting and prayer, so it’s really important to ensure these sacred sites are healthy.” (Ennis, Ciara. “The Brutality Which is America, a conversation with Hock E Aye Vi Edgar Heap of Birds.” Defend Sacred Mountains, Pitzer College Art Galleries, 2018, p. 51)

Everyone goes to these sites for worship and blessings. Prayer and fasting takes places on these rocks. You're connected with your bare feet, and not much else, which links you directly to this planet. The one in Arizona, Abalone Shell Mountain, called San Francisco Peaks, has a lot of plants and vegetation used in Navajo ceremonies that only come from that particular place. Whereas cedar and sage can be found all over the prairies. 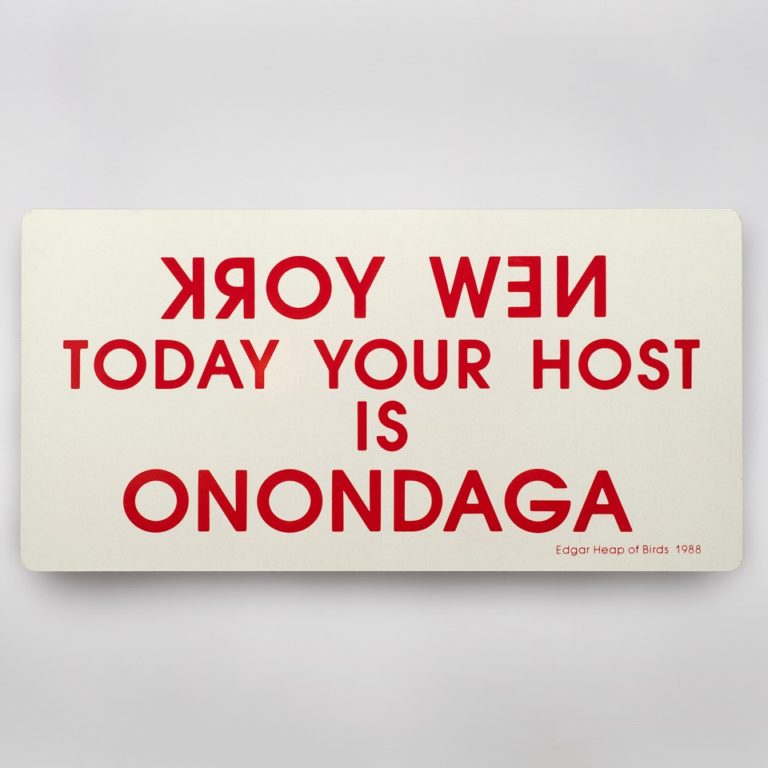 Edgar Heap of Birds’ Native Hosts belongs to the artist’s series of site-specific signage calling visitor’s attention to the native nations upon whose land they stand. Here, the Onondaga Nation is recognized as the original inhabitants of the region just south of Saratoga, New York.⁠⁠ Originally produced in 1988 for the city of New York, the public art project was censored by Mayor Ed Koch’s office, with only six of the original twelve panels allowed for display. Heap of Birds later re-conceived the project in 2019 for his solo gallery exhibition “Standing Rock Awakens the World” at Fort Gansevoort New York. 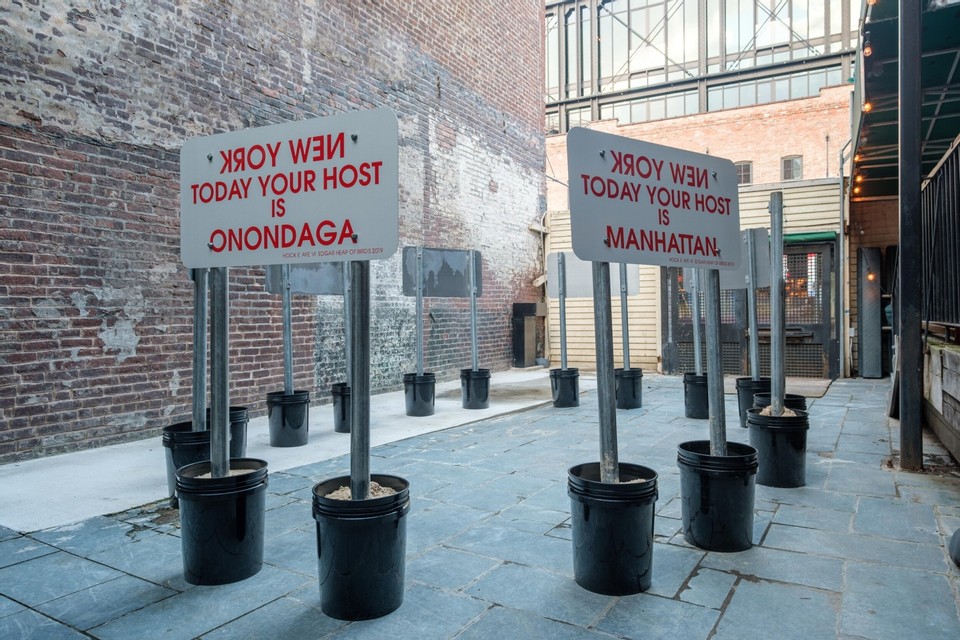 “The project is about me being a foreigner, really. I’m not from New York, I’m from Oklahoma. I feel strongly that you have to honor your hosts. Everyone that comes here needs to make that acknowledgment. I do, too. I’m a guest in New York for the Native tribes. I do the same thing when I go to Vancouver, when I go to Ohio, when I go to California. There’s no Native America. It’s all individual tribal nations.

I feel like I am mistaken as the spokesperson of Native America when I visit the art world. That’s wrong, but I take that interest and I spin it back into the community. I bring forward Native leaders that are local. I do my work as well, but the first thing I do is to acknowledge the original people of the place. In some rare cases, people from the tribe say, ‘Well, we don’t want to have a sign. We want to make our own sign, or we want to do this, or do that.’ If they say that, then I don’t make them. I’ll only do it with their support.” (Dafoe, Taylor. “I Am Mistaken as the Spokesperson of Native America“: Hock E Aye Vi Edgar Heap of Birds on What the World Doesn’t Get About Native Artists.” Artnews, 17 Jan 2020) 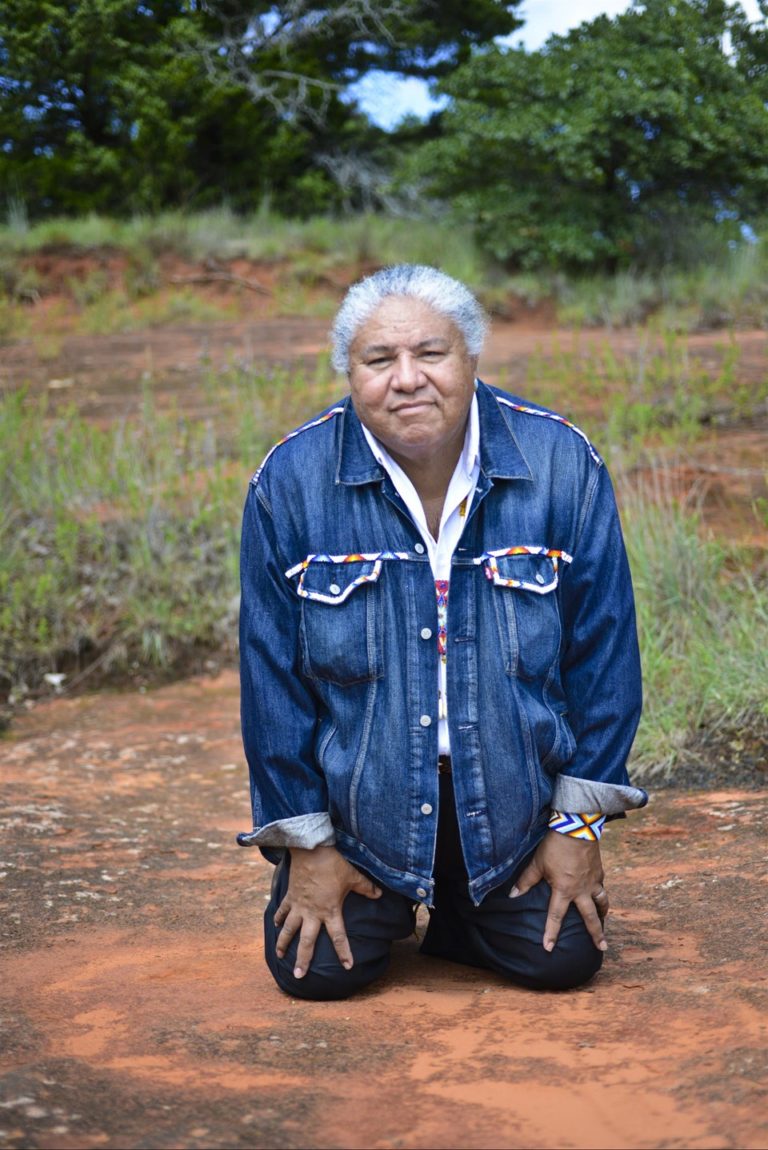 Hock E Aye Vi Edgar Heap of Birds was born in 1954 in Wichita, Kansas. He earned his BFA at the University of Kansas, Lawrence in 1976, pursued graduate studies at the Royal College of Art, London in 1977, and received his MFA at the Tyler School of Art, Philadelphia in 1979. He was named USA Ford Fellow in 2012 and Distinguished Alumni, University of Kansas, in 2014. Honorary Doctor of Fine Arts and Letters degrees have been awarded by the Massachusetts College of Art and Design, Boston (2008), Emily Carr University of Art and Design, Vancouver, Canada (2017), and California Institute of the Arts, Valencia, (2018).

Photo of the artist by Ted West