The Writing on the Wall: Alice Leora Briggs and Julián Cardona

Art League Houston (ALH) presented The Writing on the Wall, an installation of artwork by Alice Leora Briggs (based in Tucson, Arizona) and text written by Julián Cardona and Briggs (Cardona is based in Ciudad Juárez, Mexico). This show focuses on an ongoing body of work addressing border politics in the city of Juárez, and features artwork created by Briggs in conjunction with her projects with reporter and photojournalist Julián Cardona. Tia Collection is honored to loan “Abecedario de Juárez”, “Gorge” and “La Última Cena” to this exhibition. 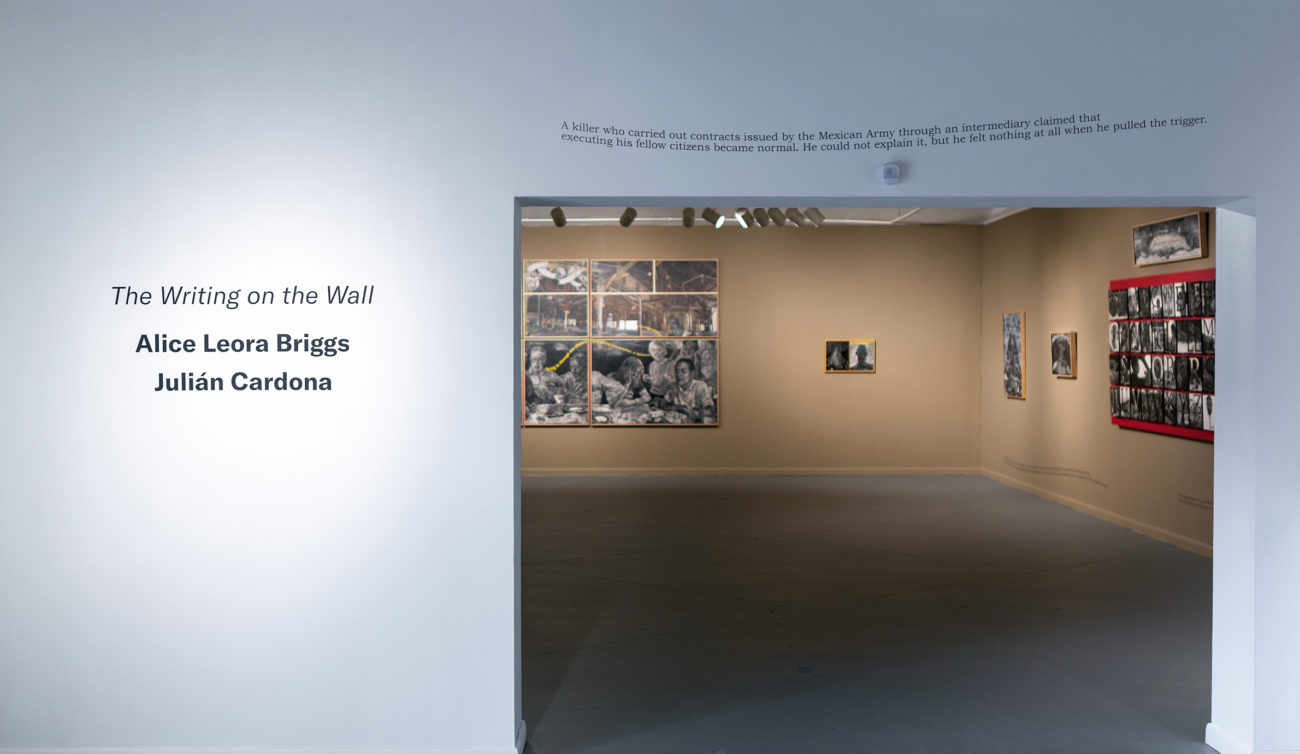 Quote above the doorway by Cardona and Briggs

A killer who carried out contracts issued by the Mexican Army through an intermediary claimed that executing his fellow citizens became normal. He could not explain it, but he felt nothing at all when he pulled the trigger. 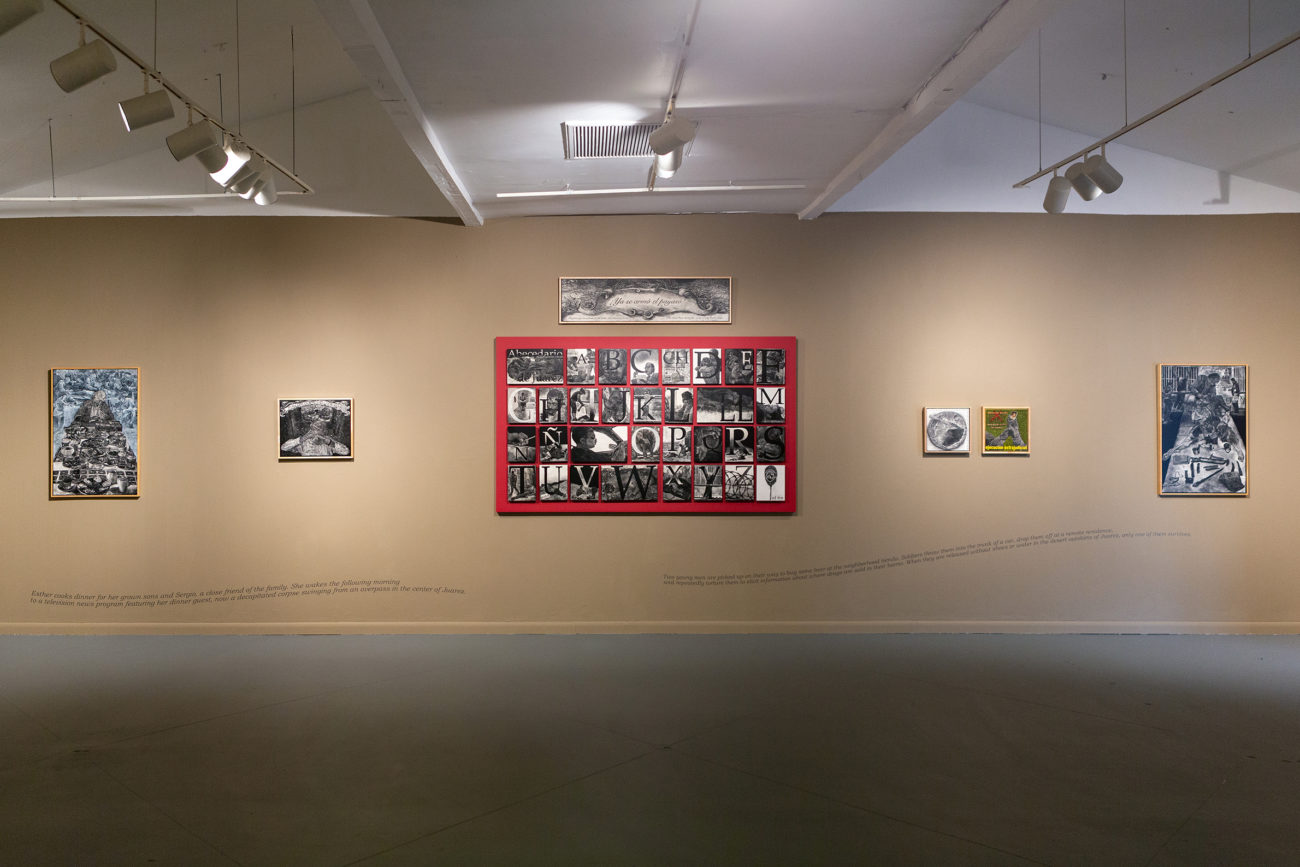 Esther cooks dinner for her grown sons and Sergio, a close friend of the family. She wakes the following morning to a television news program featuring her dinner guest, now a decapitated corpse swinging from an overpass in the center of Juarez.

Two young men were picked up on their way to buy some beer at the local tienda. Soldiers throw them into the trunk of a car, drop them off at a remote residence, and repeatedly torture them to elicit information about where drugs are sold in their barrio. When they are released, without shoes or water in the desert outskirts of Juarez, only one of them survives.

Thoughts from the artist

This exhibition, The Writing on the Wall, contains overlapping bodies of work that focus on the cocktail of frailty and strength that alternately sustains and destroys our humanity. It is not a new idea. We have been drinking and swimming through this cocktail for centuries. I work in my local landscape, la frontera, the border between Mexico and the United States. My work is also grounded by time and care spent in Juárez beginning in 2008.

The works in this exhibition provide a glimpse of my longstanding effort to make a record of the time and place in which I find myself. I hope that a group of portraits of my dear friend, Julián Cardona, provide some sense of his earnestness and of the intensity of our collaboration on an upcoming book that catalogues the memories, experiences, and invented words of the people of Ciudad Juárez when President Felipe Calderón sent 10,000 federal forces into Ciudad Juárez. Perpetrators of the ensuing rise in violence worked for the Mexican government, but in many cases they also labored for cartels. 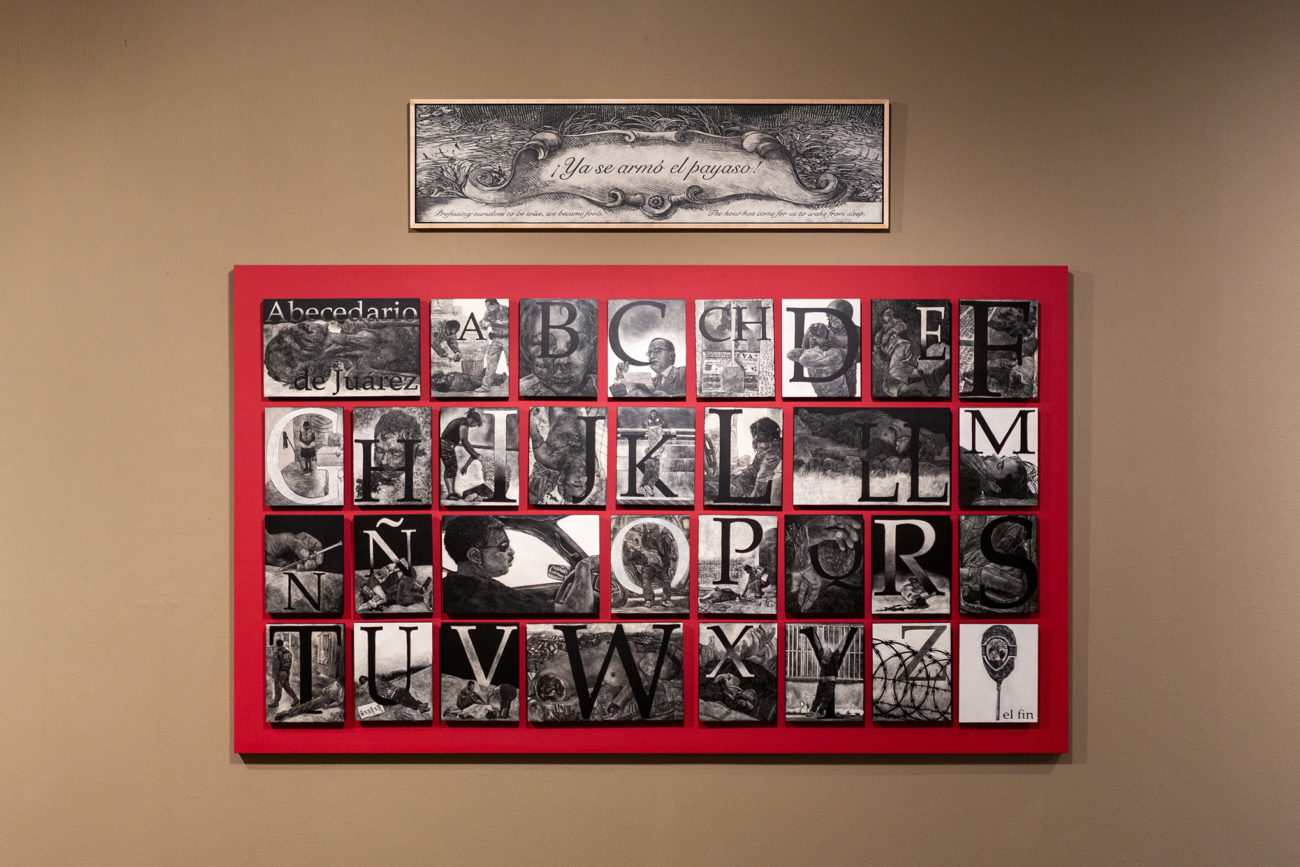 As noted by Alice Leora Briggs, Abecedario de Juárez (2010)  is a mutable theatre of tortures and executions, a pictorial Spanish alphabet in 32 panels. This homage to Juárez and Hans Holbein’s’ Alphabet of Death sharpened my interest in a new vocabulary that rose out of Juárez between 2006 and 2012 during the infamous administration of then President Felipe Calderón. Thanks to his policies, Ciudad Juárez became the most violent city on earth in 2010. 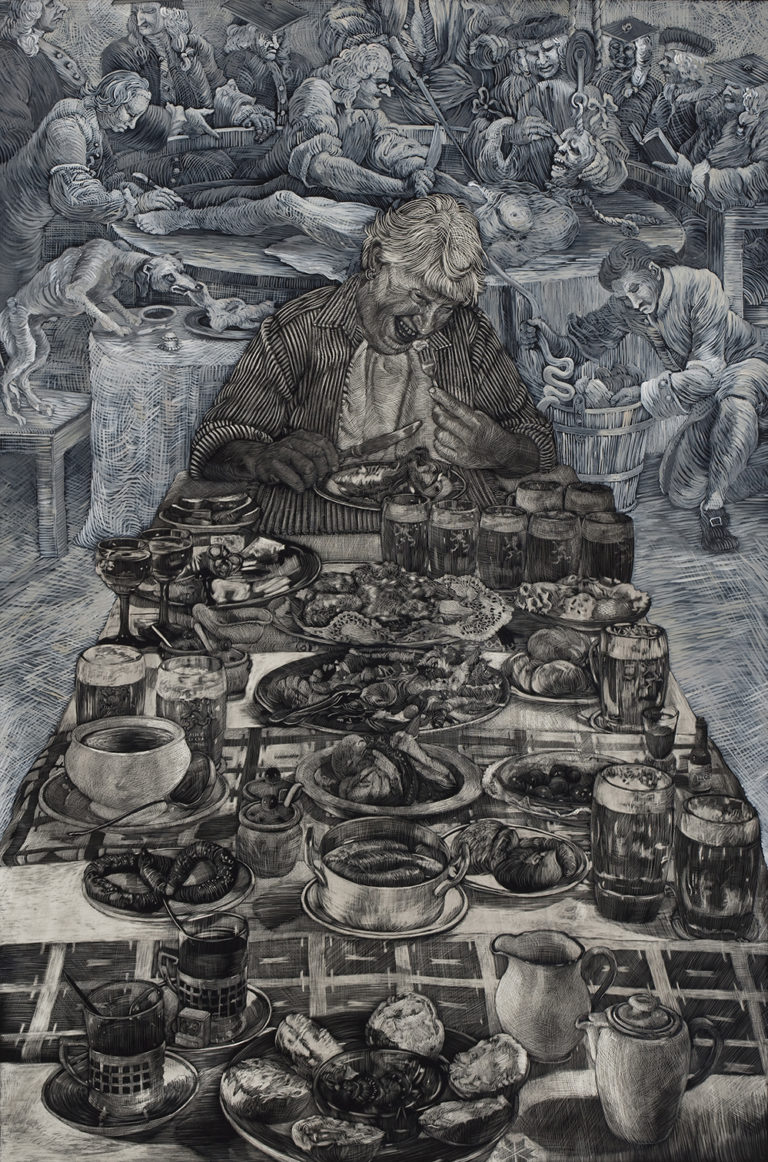 This year, Alice Leora Briggs was awarded the prestigious fellowship from the Guggenheim Foundation. The Foundation offers Fellowships to further the development of scholars and artists by assisting them to engage in research in any field of knowledge, under the freest possible conditions and irrespective of race, color, or creed. The Foundation receives approximately 3,000 applications each year. Guggenheim Fellowships are intended for individuals who have already demonstrated exceptional capacity for productive scholarship or exceptional creative ability in the arts. Her investigations into human frailties have generated thousands of drawings, woodcuts, letterpress books, broadsides, and site-specific architectural installations. These works have been featured in over forty solo exhibitions and are included in over thirty-five public collections, including Crystal Bridges Museum of American Art, Library of Congress, University of Oxford’s Bodleian Library, and Yale University’s Beinecke Rare Book and Manuscript Library. 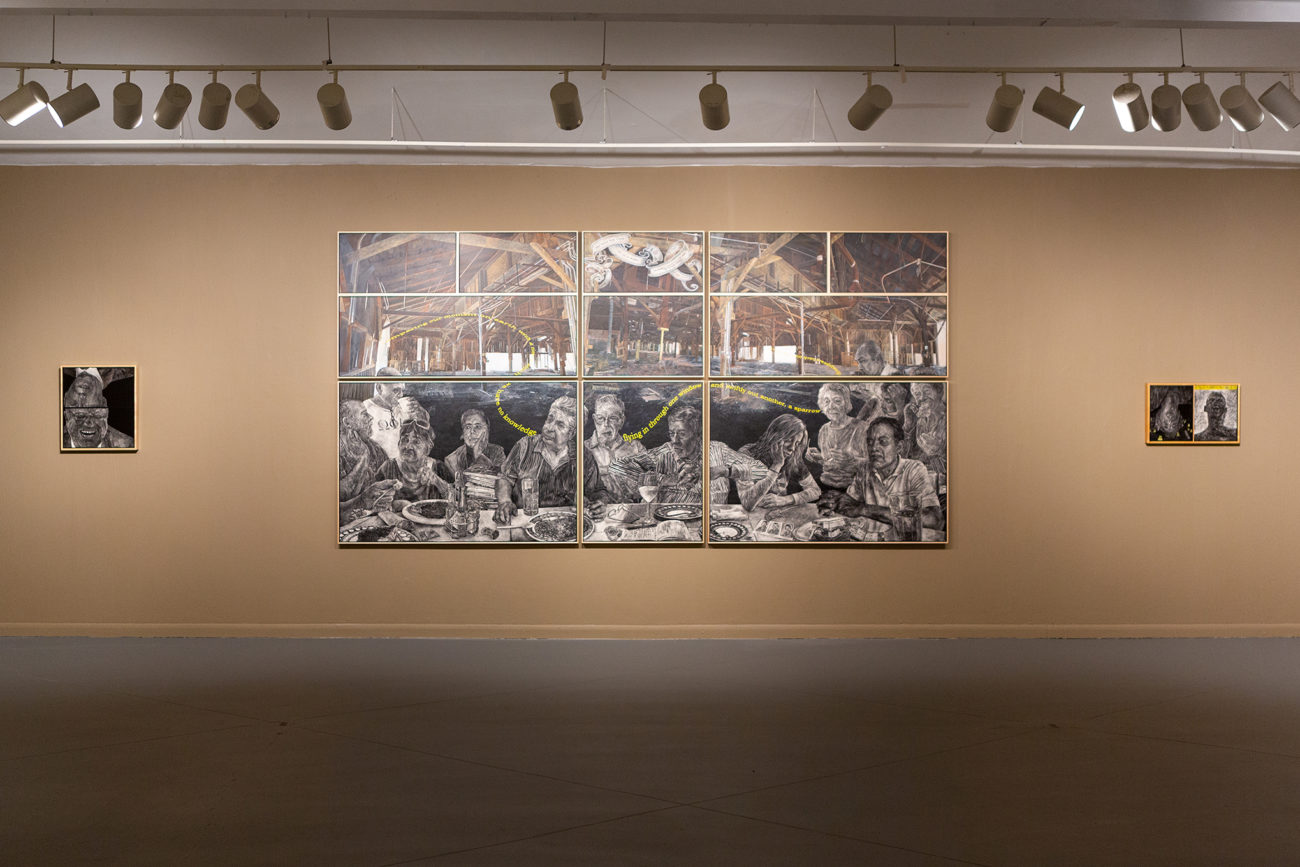 Alice described her inspiration for The Last Supper, (2015-16) as follows: The Last Supper or La Última Cena is an effort to bridge the deepening chasm between Mexico and the United States, to bring together family and friends from both sides of the border. Since this work brings together two nations, it is appropriate that it marries two methods, painting and drawing. Regardless of tools or materials, my media is molecular. The insanity of working in a miniaturist manner on a large scale…it suits me well. I often feel like an archeologist, digging up one shard at a time, hoping to assemble something whole. 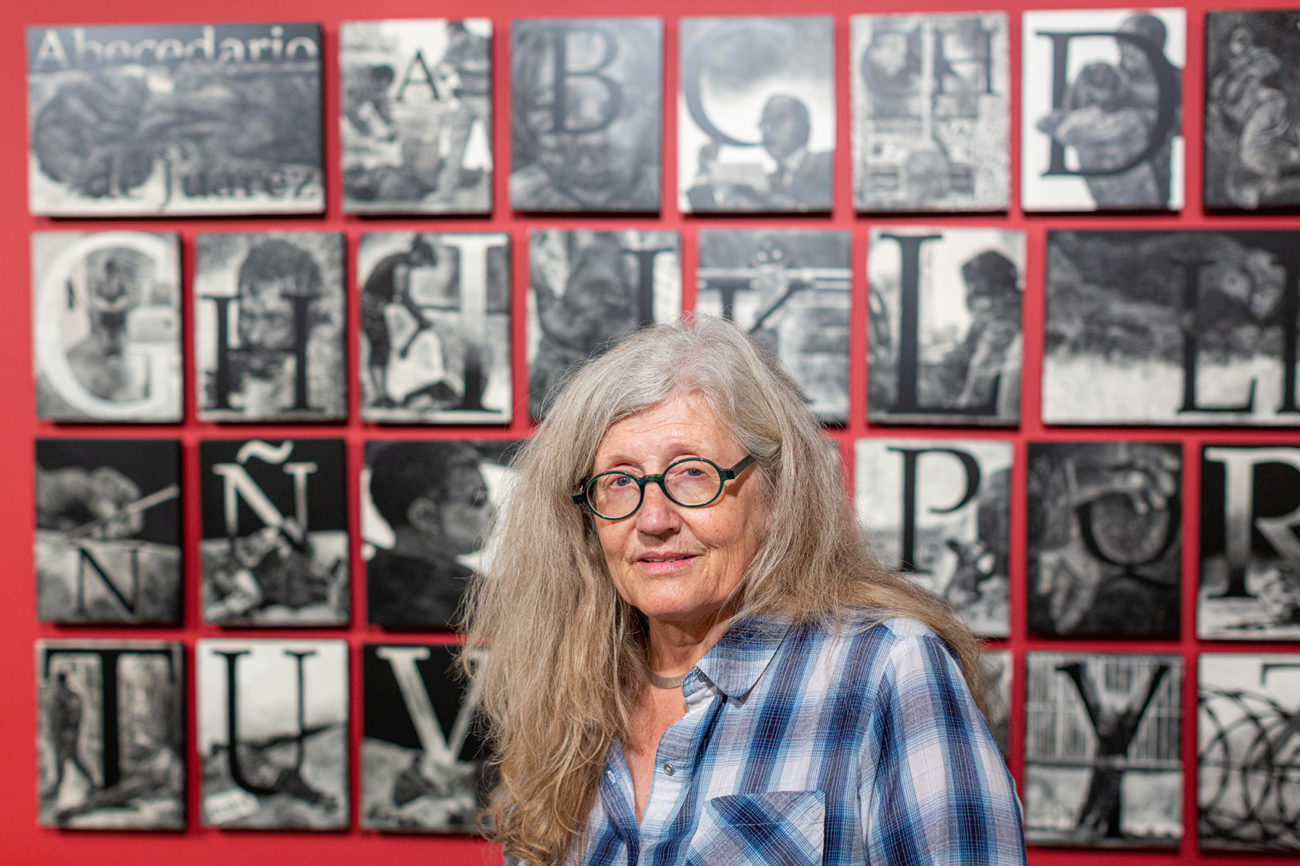 The people of Ciudad Juárez, who tell their stories in these pages, are neither composite nor fictional characters. A few gave permission to publish their first and last names. Others are identified by nicknames known only among their friends and families. A small number did not want not to be named at all. They share memories of their experiences between 2006 through 2012, years when the streets of their city exploded with violence, years when President Felipe Calderón sent ten thousand federal forces into Ciudad Juárez.