Works on Loan: Autry Museum of the West

Tia Collection is pleased to have three works on loan to the Autry Museum of the American West—an institution committed to preserving the stories and cultures of the western United States. Located in Los Angeles, CA, “the Autry” was founded in 1988 by the legendary entertainer, Gene Autry, and his wife, Jackie. At the time, they envisioned a museum that would “exhibit and interpret the heritage of the West and show how it influenced America and the world.” Following mergers with the Women of the West in 2002, and the Southwest Museum of the American Indian in 2003, the Autry’s diverse collection now boasts more than 600,000 artifacts, artworks and archival materials. 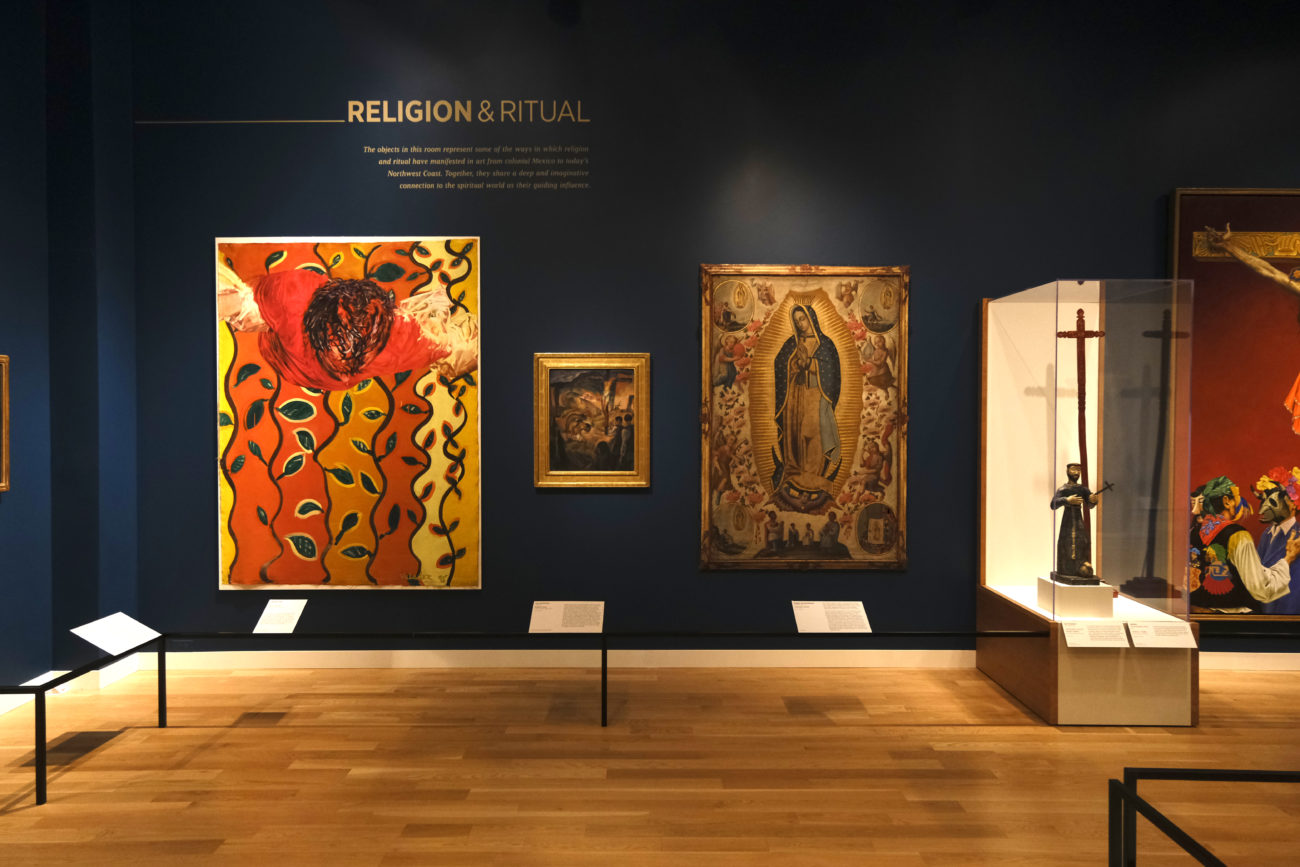 Installation view with Virgen de Guadalupe (mid-18th century). Courtesy of the Autry Museum of the West.

A Spanish Colonial Virgen de Guadalupe is the earliest work from the Tia Collection on loan to the Autry. At nearly 6 ft tall, this work’s considerable size likely indicates its function as an altarpiece. Speculated to have been produced in the mid-18th century by an unknown artist, the oil-on-canvas painting tells the legend of the Mexican Virgin of Guadalupe in sublime detail. It recounts the divine moment in 1531, when the Virgin appeared to the Christianized Indian, Juan Diego, as he journeyed across the hills of Tepeyac. Located northeast of Mexico City, Tepeyac is believed to be the home of the Aztec mother goddess, Tonantzin. Speaking in Nahuatl, his native Aztec language, the Virgin instructed Juan Diego to request that the bishop build a church in her honor. Bishop Juan de Zumárraga met Juan Diego’s accounts with initial skepticism, and asked for evidence to prove the encounter took place. When Juan Diego explained the bishop’s misgivings to the Virgin, she directed him to gather the Castilian flowers blooming out of season along a hillside. Dutifully, he collected the blossoms in his tilma (native cloak) and presented them to the bishop. As he unraveled his cloak before the clerics, they were astonished to discover the Virgin’s likeness remarkably imprinted onto the textile. Soon after, a church was erected, and to this day, the Virgin of Guadalupe is a profoundly popular national symbol across all of Mexico.

Details of the painting illustrating the apparition of the Virgin of Guadalupe to Juan Diego. 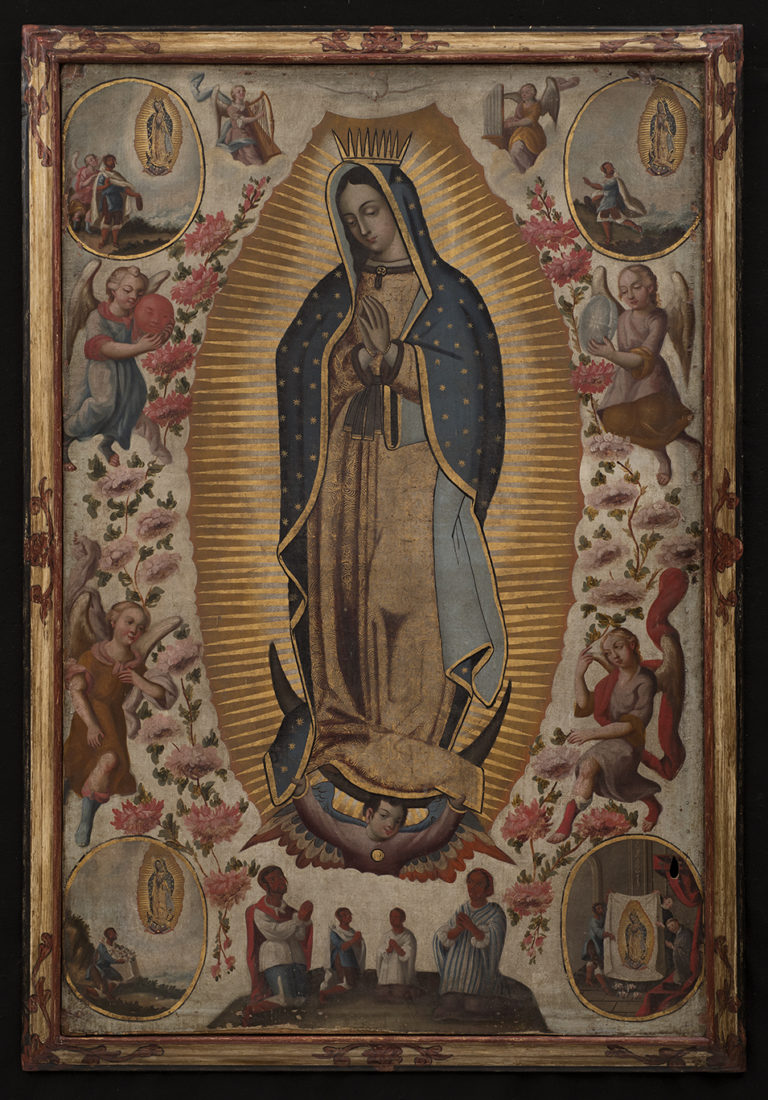 “That the miraculous appearance of the Virgin Mary took place on a sacred Indigenous site was no coincidence,” reads a description from the Autry. “Roman Catholicism was a powerful weapon in the Spanish Conquest of the Americas, and the images of the Virgen de Guadalupe (named after an earlier apparition of the Virgin that appeared in Guadalupe, Spain) and other saints were commissioned by church officials and created by local artists, who often reconfigured certain icons by incorporating regional elements. In the Virgen de Guadalupe, these include her darker skin and hair and the sun-like rays extending from her form, thought to derive from the Book of Revelations, which describes an apocalyptic woman ‘clothed with the sun, and the moon under the feet.’”

The Virgen de Guadalupe is currently on view in the Autry’s ongoing exhibition, Art of the West. Installed in the Irene Helen Jones Parks Gallery of Art, the presentation showcases the dynamic and evolving world of art, created by the many peoples who have shaped the American West. Contrasting this Spanish Colonial artwork is another large-scale painting on loan to the exhibition from the Tia Collection: Death of a Female by Cree artist Kent Monkman. Part of the artist’s Urban Res series, this body of work reimagines city centers that once served as important sites for Native people, but where a majority of the Indigenous population currently lives beneath the poverty line. Set against gritty inner-city environments, the series addresses the historic and contemporary Indigenous experiences of colonization, sexuality, loss and resilience, as well as how these experiences stand in opposition to the dominant art-historical narratives established in the Western canon— from the portraits of the Old Masters and landscapes of nineteenth-century North American painters, to the Modernist abstractions of Pablo Picasso, Francis Bacon and Henry Moore. 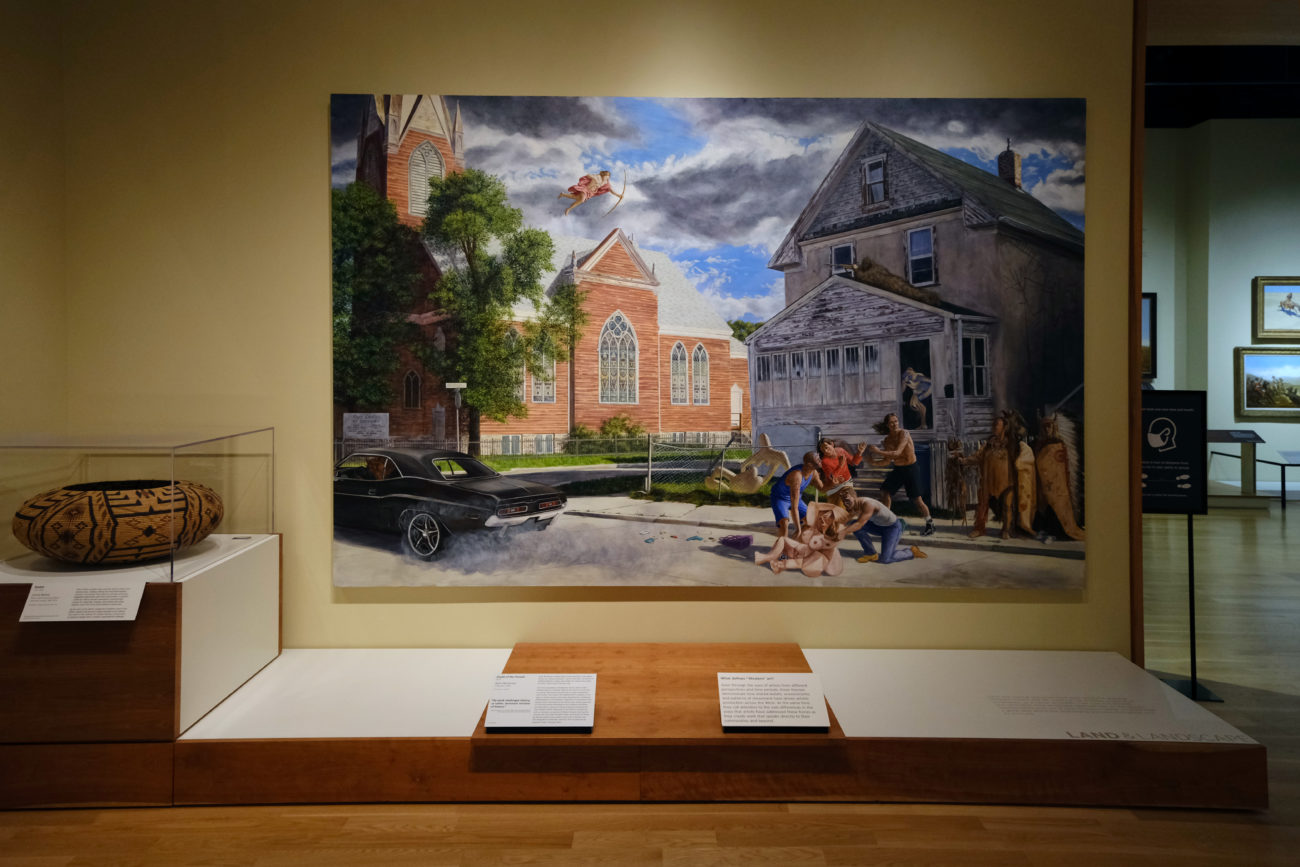 Installation view with Kent Monkman’s Death of a Female (2014). Courtesy of the Autry Museum of the West.

“My goal is to counter the one-sided version of art history that exalts the European ‘discovery’ of this continent and to celebrate and commemorate the indomitable spirit of Indigenous people.” 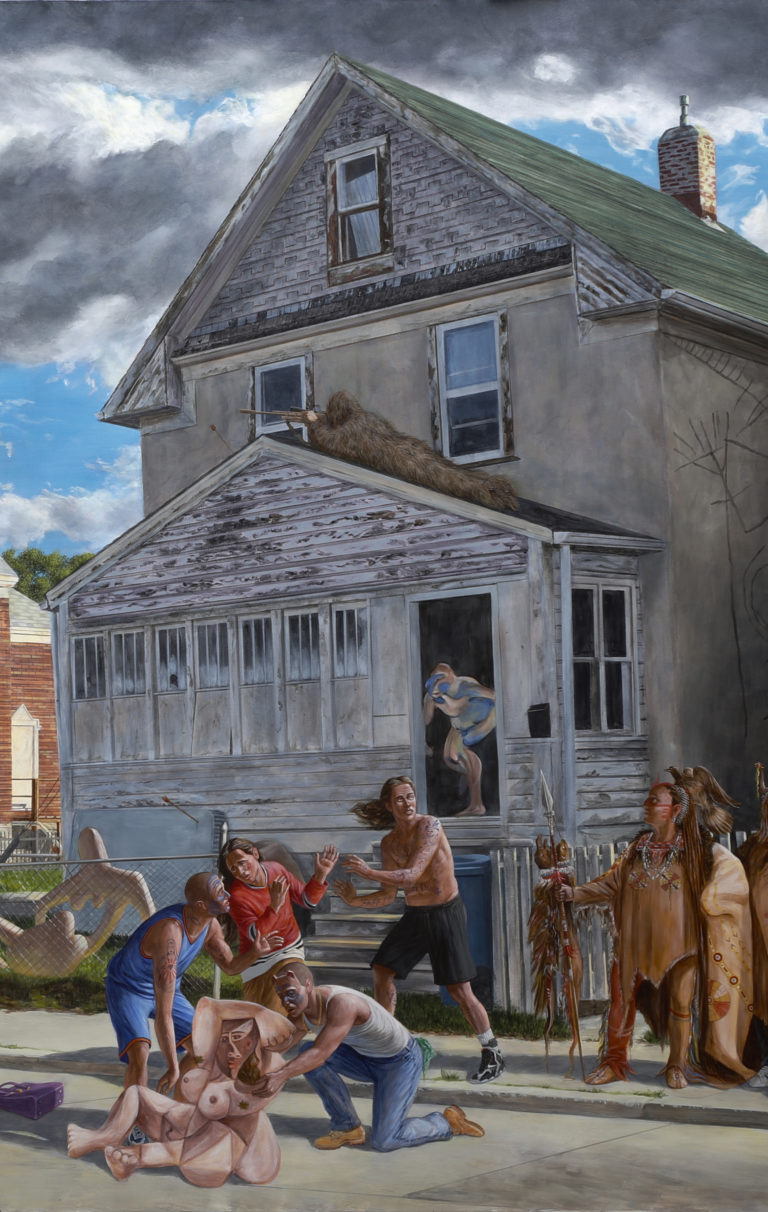 Drawn from Nicolas Poussin’s Death of Sapphira  (c. 1652), Monkman’s Death of a Female depicts one of Picasso’s cubist demoiselles as the casualty of a hit-and-run incident. Her fragmented form speaks to the ways in which women have been butchered, sexualized and objectified by Modernist depictions, and furthermore, casts her as a victim of the history of representation. Death of a Female additionally references the Modernists’ flattening of pictorial space, which Monkman views as a metaphor for “the shrinking of space for Indigenous people who were forced onto reserves that are tiny fractions of their original territory.” In the foreground, a group of Native men come to her aid, their gestures of mourning mimicking those of Renaissance-era paintings. Meanwhile a classic muscle car with a Picasso bull at its helm flees the scene. Overhead, a celestial being pours down arrows in an effort to strike a Henry Moore reclining nude, who is notably held captive behind metal fencing. Another male figure, based on a Francis Bacon nude, stands in the doorway of a dilapidated house, while a cadre of Mandan warriors—cited from a painting by nineteenth-century American artist George Catlin—look on as spiritual observers.

The final work that Tia Collection has loaned to the Autry is Sacred Rain Arrow, a monumental bronze by Apache artist Allan Houser. Considered one of the artist’s most iconic and widely recognized subjects, the sculpture describes an Apache legend, wherein during times of drought and famine, the elders would select a strong, young warrior whose spirit was clean. A ritual was held to bless the warrior’s arrow with a prayer for precipitation, as he was sent off to scale the highest point on the horizon. There, he knelt down, raised his bow toward the sky, and shot the prayer-endowed arrow high into the Spirit World. Born Allan Capron Haozous in 1914 near Fort Sill, Oklahoma, Houser was the first child in his family to be born out of captivity. His parents had been imprisoned in St. Augustine, Florida, after the 1886 surrender of legendary Apache leader Geronimo, who was his grandfather’s first cousin. After their relocation to Fort Sill, Houser’s parents were granted freedom in 1913. 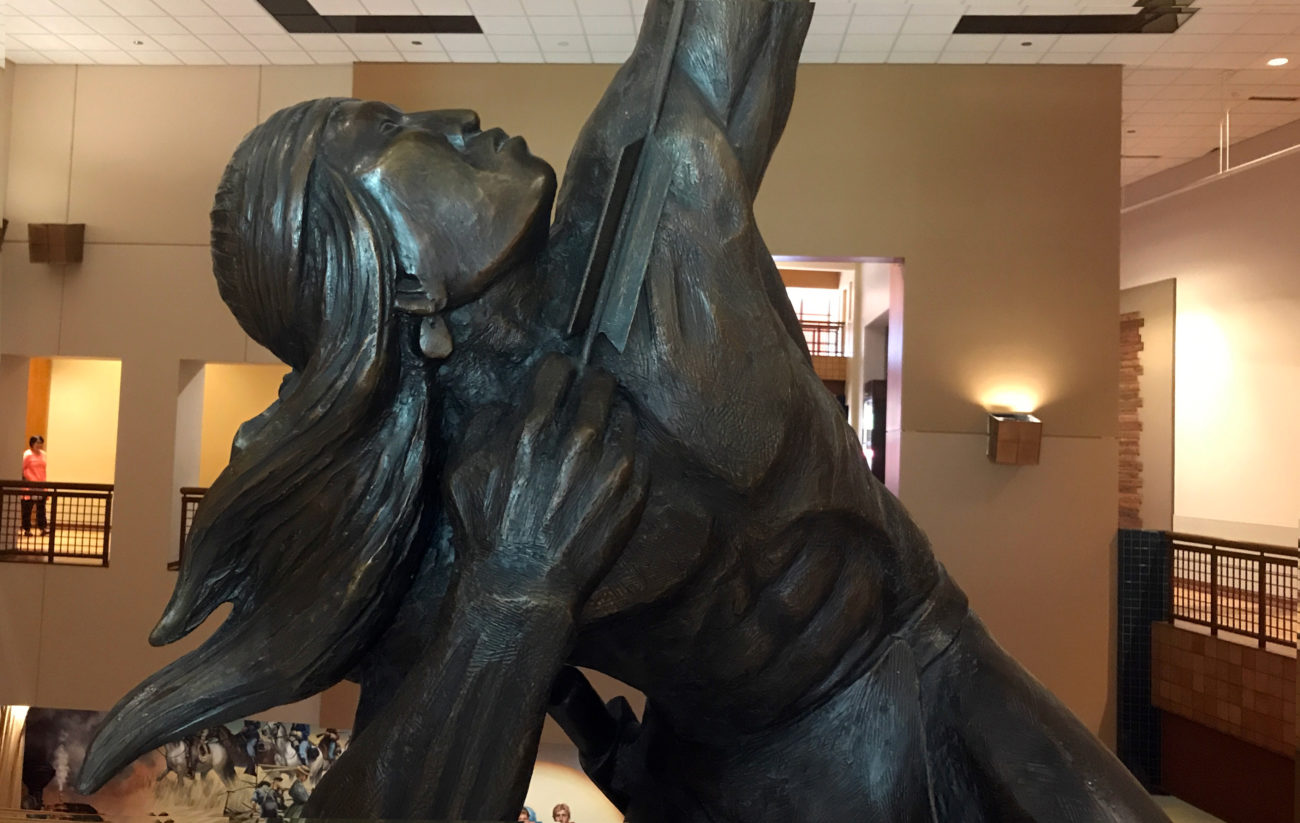 Detail of Allan Houser’s Sacred Rain Arrow (1988) at The Autry Museum of the West.

“I work with clay and pull it around and see what I can do with experimental forms. When I’m creating something, I’m there with the clay, and after a while something begins to build. One of the good things is creating something that you’ve never seen before.” 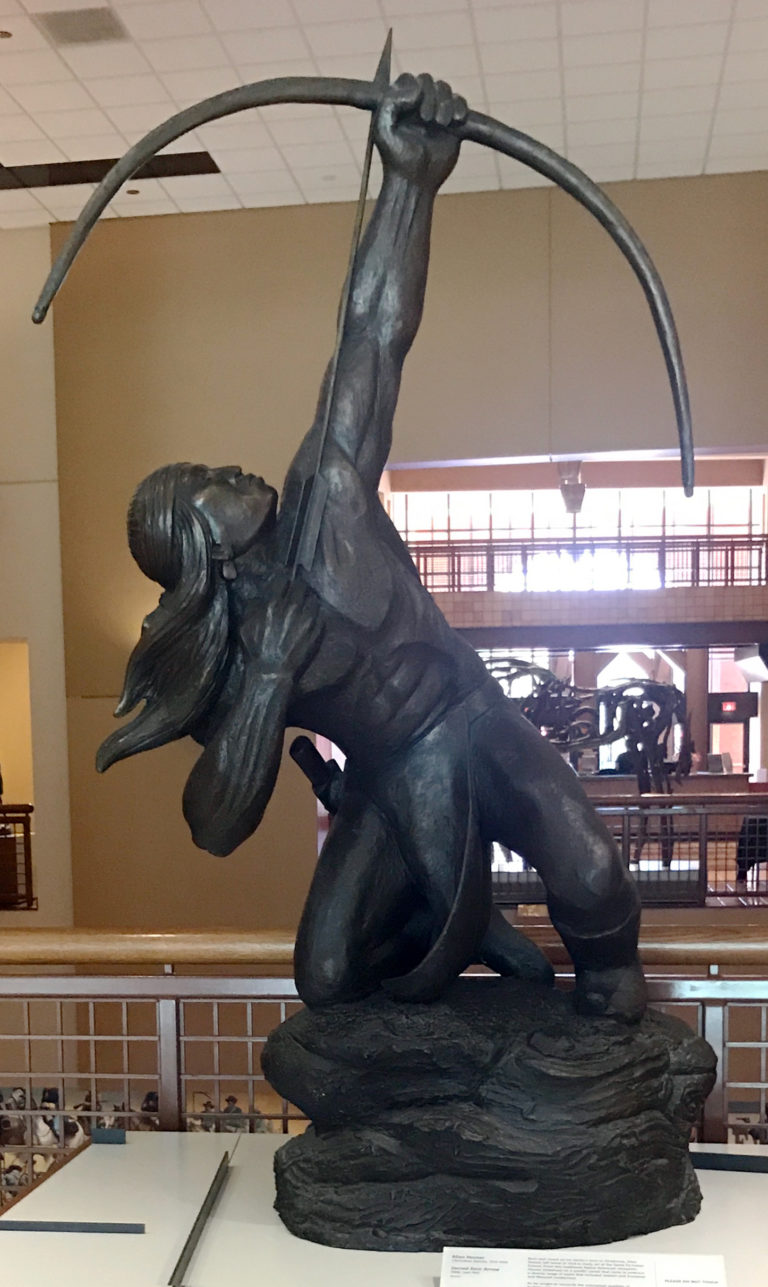 Encouraged by his father to obtain a formal education, Houser studied painting at the Santa Fe Indian Art School, where school administrators suggested he change his name to Houser. After graduating in 1938, his attention turned to sculpture after relocating to Los Angeles in 1942. During a visit to the Pasadena Art Center, located just north of L.A., Houser was exposed to the work of Modernists sculptors Jean Arp, Constantin Brâncusi, Henry Moore, Isamu Noguchi and Barbara Hepworth. This encounter would cement the foundation for what would become Houser’s art making approach of employing Modernist sculpture as the mechanism to convey his Apache heritage. On extended loan through 2022, Houser’s Sacred Rain Arrow currently resides in the Autry’s central atrium, where it has welcomed visitors since 2012.

These loans were made possible through the initiative of Amy Scott, Chief Curator, Marilyn B. and Calvin B. Gross Curator of Visual Art at the Autry. To learn more about the Autry Museum of the West, visit theautry.org.