Tia Collection started obtaining Michael Naranjo’s work in 2011, and has since accumulated over sixty bronze works. There is something so special and intimate about each piece, how every one tells it’s own gentle story of culture, life and of the artist who creates them. Michael depicts the rich traditions of Native New Mexico, from dancers and animals, to the spirits and memories of his people. From memories from his youth and his sense of touch, Michael sculpts without the sense of sight. Part of Michael’s process is to see sculptures in museums around the world with his hands. He has been granted special permission to touch some of the worlds greatest sculptures, including Michelangelo’s David in the Galleria dell’Accademia in Florence, Italy, and James Earle Fraser’s End of the Trail, at the National Cowboy and Western Heritage Museum in Oklahoma City, Oklahoma. Michael has since sought exhibitions and public installations where visitors are welcome to touch the artwork. These bronze sculptures are remarkable experiences for all art lovers.

The love that he has for his art and process transmits to others not only in museum exhibitions and fine art galleries, but in classrooms and studios. He has mentored countless artists, both sight impaired, and those with sight.

The Eiteljorg Museum of American Indians and Western Art in Indianapolis, IN, and the Millicent Rogers Museum in Taos, NM are featuring solo exhibitions of Michaels extraordinary artwork. The Eiteljorg has titled their show “Please Touch, The Sculptures of Michael Naranjo”, and the Millicent Rogers Museum has titled their show “In My Minds Eye; The Sculptures of Michael Naranjo, A Touchable Exhibit”, both of which invite the viewers to experience the sculptures with their hands.

We are proud to have partnered with these institutions, as well as with Michael and Laurie Naranjo for these extraordinary shows.

When I think of the eagle, I imagine the feeling of flying - total complete freedom. But, can the spirit of man ever attain it? 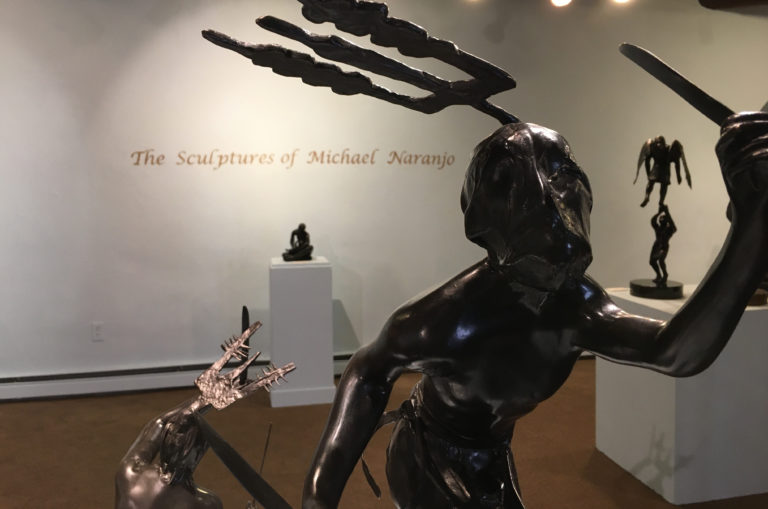 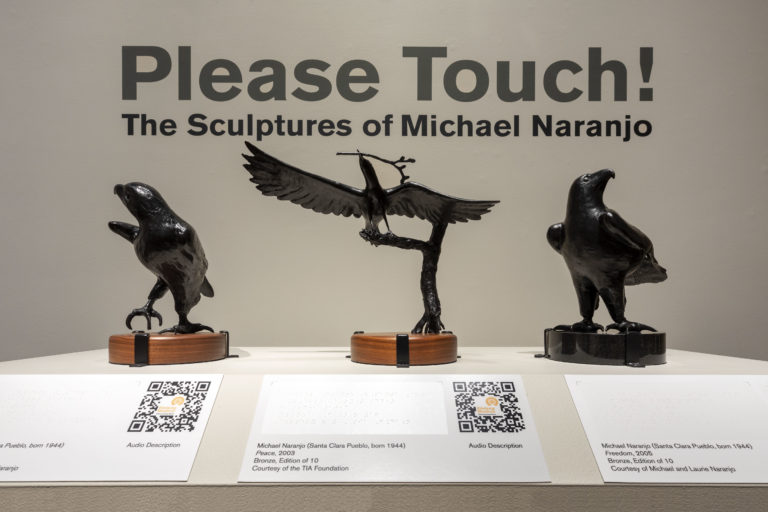 By learning through touch and fashioning from memory steeped in family tradition, Naranjo's elegant bronzes give form to his past and present and push the limits of the future. Michael Naranjo is unwavering in his determination to be known simply as an artist-not as a blind artist, the disabled artist, the Native American artist-just a sculptor whose job it is to model and create. His are not the works of ephemera or conceptual art, as engaging as they may be; Naranjo's bronzes are made to endure many lifetimes. Our job is to admire, enjoy, and appreciate his sculptures using all of the senses gifted to us.

An excerpt from a recent letter from Laurie Naranjo, Michaels wife and business partner-

We decided to offer one set as a “collection” of Michael’s work and, with the help of Matteucci Galleries, we were led to the Tia Collection. We had various meetings with “The Collector” to talk about the collection, why we’d saved all these pieces and especially about Michael’s dream of being able to continue to show these pieces as totally accessible and touchable. And this is when the magic started…for as it turns out “The Collector” was totally agreeable to this concept. Michael and I both felt that this collector was not only interested in collecting art of various artists, but also wanting to understand the artists whose work he collected. So, it seemed as if everyone’s needs were met and beyond satisfied and in 2012, The Tia Collection obtained most of everything we’d been saving just for this purpose and a true friendship and understanding was born.

Since that time, besides for pieces of Michael’s being shown in group shows curated by Tia, he has also had a number of one-person totally accessible/touchable exhibits.

Oddly enough, he has two going on right now, one at the Eiteljorg Museum in Indianapolis, IN and the other at the Millicent Rogers Museum in Taos, NM.

The ridiculous part is that we’re in the middle of a World Wide Pandemic! And so, though the show at the Eiteljorg just squeaked by with an opening in early February, 2020, the Taos show is yet to open and for now, both of these Museums remain closed. (Luckily, the Eiteljorg has extended the show through Februray, 2021, so there’s hope!)

The part I’m trying to figure out now is how to put into words this irony: Michael has over 60 pieces out for the general public to enjoy at this time,in two different locations,  but now, it’s as if a sign at the opening to each gallery should  read something like: “Now  you, too, can see these bronzes the way the artists does…not at all!”

Life is change and change is good and our hope that good will come to all of our lives as this Covid begins to, somehow, get under control. Life is precious but bronze is precious, too, in its own way, in that maybe through the bronze, life goes on. It is our hope that when the time is right, Michael’s bronzes will again be able to get up and out, as should we all!